More than 20% won’t get vaccine right away

As we close out the beast of a year that was 2020, the Illinois House of Representatives is looking at the potential of new leadership, we’re watching our healthcare workers and most vulnerable get vaccinated and we’re all looking forward to a better year.

For the first time in decades, the ability of Illinois House Speaker Mike Madigan to retain his position as Speaker is in question. Nineteen Democrats in the House have indicated they will not vote for Speaker Madigan in January, causing plenty of prognosticating about the future of the Illinois legislature. We asked Serafin Power Poll members to predict whether Speaker Madigan will be re-elected to serve another term as Speaker and the responses were split: 39% said the Speaker will not be re-elected and 39% saying he will retain his post. 22% were undecided, recognizing that Yogi Berra could’ve been talking about Illinois politics when he said, “It ain’t over till it’s over.”

With the December holidays in full swing and the Illinois Department of Public Health recommending that people stay home as much as possible, we asked how Power Pollers were going to be enjoying the season. Most people (60.2%) responded that they would be celebrating with only the members of their household, though 24% said they would celebrate with outside households. Another 10.6% said it would be a Zoom holiday, while nearly 5% are skipping any sort of celebration. If you’re still deciding how to spend the holidays, check out the recommendations from the state on how to celebrate safely at AllInIllinois.gov.

This week saw the first COVID vaccines administered in Illinois, hopefully signaling a beginning to the end of the pandemic. But not everyone is on board with getting the shot right away, perhaps because the vaccine has been given emergency use authorization by the FDA. While a majority of respondents (78%) want to get the vaccine as soon as it is available to them, a not-insignificant minority (21%) are unsure on when to get the vaccine or are waiting to see how others respond to it. Less than one percent said they weren’t interested in the vaccine at all.

What are you most looking forward to doing when the pandemic is over and we return to normal life? 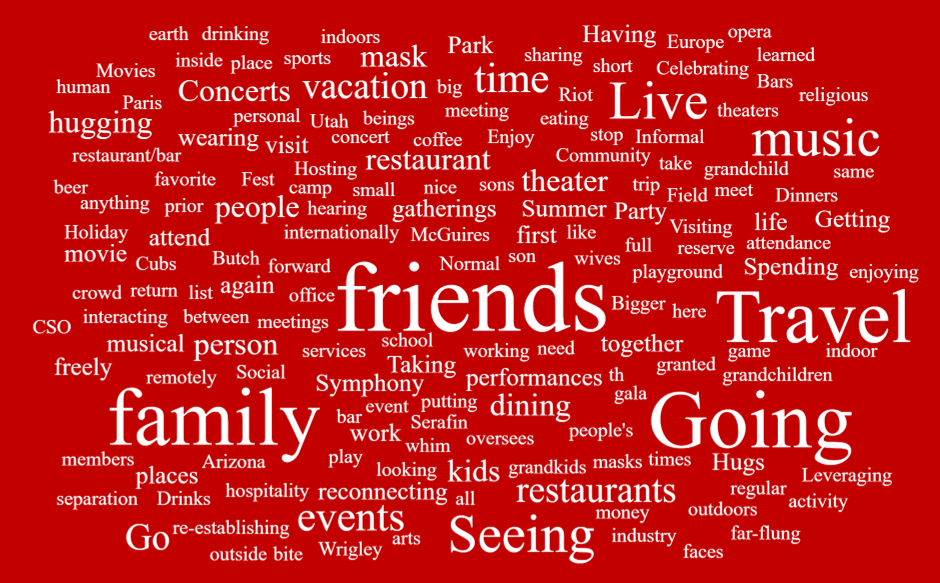 With the start of vaccinations giving us some much-needed hope this holiday season, we asked our Power Pollers what they’re most excited to do when the pandemic is in the rearview mirror. Some key themes that emerged include seeing and hugging family and friends, getting back on the road (or in the air) to travel and experiencing things in person, like music, sports and movies. Plenty of people also can’t wait to get back to restaurants and bars, including those who said they’re most looking forward to the annual Serafin Party at Butch McGuire’s!

Friends, this Monday, December 21, is the winter solstice, the darkest day of a dark year. But after that, the light starts to grow again, defeating the darkness and providing its warmth and glow to a year we are confident will be better. The entire Serafin Team wishes you all happy holidays and a blessed 2021!

A total of 896 Serafin Power Poll members were surveyed and the participation rate was 13.7%. The Serafin Power Poll is not a scientific poll, but rather a fascinating and non-partisan glimpse into the attitudes and opinions of the decision-makers and thought leaders in the Chicago region.