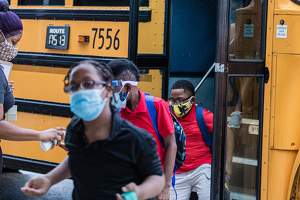 Most Palm Beach County influencers who responded to a Palm Beach Post poll this month say reopening in-person school classes this week was the right thing to do in the midst of the coronavirus pandemic, even as teachers have railed against the move that has been broadly criticized for its lack of planning and ensuing chaos.

The Post’s monthly Palm Beach County Power Poll surveyed 302 local politicos, educators and civic leaders, receiving responses from 87 of them, 50 of whom indicated the school district did the right thing by committing to reopening campuses. 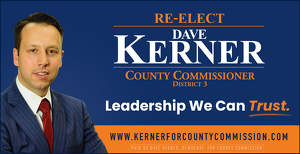 LEADERSHIP WHEN WE NEED IT MOST

ENDORSED BY THE PALM BEACH POST: "Central to [the county's] ‘unified voice’ has been the stewardship of Kerner as county mayor during this crisis. [He] has been a consistently calm voice who has sought — and often achieved — collaboration." - July 26, 2020

Mayor Dave Kerner has helped lead Palm Beach County’s response to COVID-19.  He coordinated with state and local agencies to ensure Palm Beach County had the resources and supplies necessary to respond to the pandemic.

Dave Kerner has a long history of public service.

Before being elected County Commissioner, Mayor Kerner served as a Police Officer and a Special Prosecutor. He also served two terms in the Florida House of Representatives. Considered one of South Florida's most effective lawmakers, he sponsored fourteen bills passed into law.

County Mayor Dave Kerner was honored as the Police Officer of the Year for the City of Alachua. While serving as a Police Officer, he was assigned to the night shift and served as a Field Training Officer.

County Mayor Kerner has emerged as a leader in law enforcement, the judiciary, criminal justice, and civil law. Since 2010, he has served as a civil trial attorney with a local firm in addition to his public service.

While 37 survey respondents said the district should have avoided that commitment for at least a few more weeks into the county’s Phase 2 reopening process, 32 said students need to get back into classes for social interaction and to be in a more effective learning environment. Another 18 said reopening campuses was justified because not all students have good access to virtual learning.

“Though everyone was understandably nervous, the school and the teachers were ready,” School Board member Erica Whitfield wrote as a survey response on Monday, the first day of in-person classes.

About 900 teachers chose to stay home in the opening days, leaving schools scrambling for substitutes. And 124 district employees, including 64 teachers, had resigned as of Tuesday, district records show.

The district has reported on its website that COVID-19, the disease the coronavirus causes, has infected three students and four employees since Monday. Eight employees had been infected since Sept. 16, the district’s online coronavirus dashboard shows.

Eight teachers have sued the district to shut down public school campuses, saying the reopening plan poses such a danger to their health it is illegal. A judge is expected to rule in the matter shortly.

“Constituents have expressed a great deal of distrust of information concerning COVID 19 and dissemination of information from federal, state and local levels,” Port of Palm Beach Commissioner Joseph Anderson wrote in his survey response. He said teachers told him privately they feel concerned.

“Many schools are not prepared or have the accommodations to follow guidelines or lack of a plan especially in minority populated schools,” Anderson said.

About 57 percent of more than 136,000 students who responded to a district survey earlier this month said they intend to continue taking virtual classes. Teachers counted 55,517 students in attendance on Monday. That number declined to 53,607 by Thursday. The district’s enrollment last year was 175,000, an official headcount for this fall is still weeks away but is expected to see a dip.

School districts nationwide have debated the past few months over the advisability of face-to-face classes in a time of a pandemic. Coronavirus cases have been declining in Palm Beach County and Florida.

At the same time, 9.5 percent of kids and teens younger than 18 in Palm Beach County have tested positive for COVID-19 in the two weeks leading up to Thursday, Florida Department of Health reports show. The share of all tests countywide showing positive results over the same time span has hovered around 4 percent.

The Post’s poll also asked respondents what they considered their biggest issue when deciding how to vote in the presidential election.

Three issues accounted for most of the 87 responses to that question, with 26 saying the economy was on their minds; 22 saying the federal government’s response to the COVID-19 pandemic; 18 saying social justice; and nine citing “law and order.”

“People are afraid to speak out for fear of physical attack and cancel culture, but they’ll be voting for law and order and President Trump,” said Boca Raton conservative activist Jack Furnari, co-founder of BIZPAC Review.

Democratic former U.S. Rep. Tim Mahoney, whose congressional district spanned Royal Palm Beach and Wellington, had a different take. “The major issue in this election is the assault by the Trump Administration on the Constitution and the rule of law.”