Oakland Gives Thumbs Up to Masks

Residents split on who Biden will select as running mate 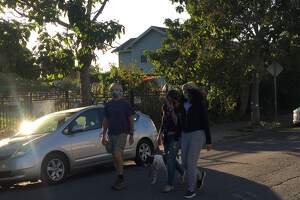 Oakland leaders are crystal clear that wearing a mask is job No. 1 in the fight against COVID-19, while they are surprisingly split on who should be Joe Biden’s No. 2.

According to a new Oakland Power Poll released July 10, residents also overwhelmingly oppose fully reopening schools and colleges, with respondents evenly split about whether schools should be fully remote, partially remote or employ staggered attendance. In addition, more than half of those answering the poll were reserving judgment on cuts to the Police Department until after seeing how the city spends the savings.

The Oakland Power Poll, part of a nationwide survey that asks leaders in several communities to give their opinions on important local issues, surveyed nearly 300 residents July 6-9, with a 10.25 percent response. Among the findings: In an extraordinary public health endorsement, all respondents said they wore a mask outside the home, with 6 percent at all times and 3 when not exercising.

The practice underscores both government and health directives, plus study results.

Earlier adoption could have helped slow the spread.

National politics offered a twist, however.

Some 34.5 percent responding expected Joe Biden to select U.S. Senator Kamala Harris, an Oakland native, as his running mate, but Senator Tammy Duckworh, D-Illinois, was a close second at 20.7 percent. The amount equal to those who named Duckworth said they didn't know or had no opinion. None of the others on Biden’s vetting list posted significant numbers.

Duckworth’s surge could be attributed to two factors: Trump backing a Fox News host’s questioning Duckworth’s patriotism, plus a recent New York Times column touting the Purple Heart recipient as the ideal person for the second slot on the Democratic ticket. (Duckworth responded to Trump and Fox’s Tucker Carlson with a scathing column in the Times after the Power Poll closed).

Trying to predict the future of Oakland schools, which resume in a month, is a more difficult proposition than wagering on the veepstakes.

The pandemic’s changing nature, evolving governmental guidelines and parental and instructor concerns have left the situation in flux. Both the Oakland Unified School District and UC Berkeley, for example, are struggling to put together workable plans. Of those responding to the poll, 31 percent favored staggered day attendance, the same number preferred fully remote learning and 28 percent back partial remote instruction. Only one person backed a full return to schools, reflecting the quixotic position that President Trump advanced earlier in the week.

Answers to the protective gear and school questions illustrate how quickly the virus is altering prevention, the rising number of cases and deaths, plus reopening efforts, which scientists blame for the surge. A case in point: When the last Oakland Power Poll was released a month ago, the coronavirus had claimed the lives of 113,000 Americans; today the number exceeds 133,000. That 20,000 jump is the equivalent of the entire population disappearing in Oakland’s 94609 ZIP code.

The City Council’s initial cut of $14.3 million to the Police Department’s budget drew some criticism as too low, but residents are taking a wait-and-see approach. More than half of the poll respondents – 52 percent – said they would reserve judgment until they see what the city actually does with the funds. Some 10 percent thought the City Council hit the right amount, 21 percent felt the cuts should have been deeper, while 14 percent said the budget should have been left alone.

Methodology: The survey, which is not a scientific sampling but instead a window into the thinking of Oakland community leaders, reached 283 people with a response rate of 10.25  percent. To view the list of Oakland Power Poll members, click here.