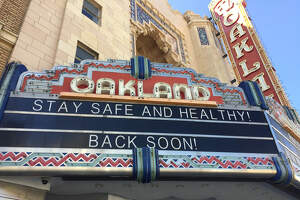 Oakland community leaders resoundingly approve of the local response to the coronavirus pandemic and gave top marks to Gov. Gavin Newsom, according to a new Oakland Power Poll.

Respondents also remain nervous about their finances while at the same time are split about how to spend federal bailout checks.

The Oakland Power Poll is part of a nationwide survey that asks leaders in several communities to give their opinions on important local issues.

Unlike the halting reaction to the federal response – a CNN poll released April 8 showed that 55 percent of Americans think the U.S. has done a poor job preventing the spread of coronavirus –  Oakland Power Poll respondents gave exceedingly high marks to the local and state reaction, with 97 percent saying they approved.

“This crisis, as all crises, has really exposed the vulnerabilities in our society, and through the void of presidential leadership, regional and local leaders have stepped in,” Bachand said.“They, along with all the essential workers showing up every day at risk  to themselves and their families, are the true heroes.”

As with many agencies, Operation Dignity has to balance the safety of staff with assisting vulnerable clients, all while navigating uncharted waters.

“In large part due to guidance from Governor Newsom, county agencies have gradually developed a strategy,” she said. “Thanks to the governor’s leadership, and Mayor Libby Schaaf’s strong engagement, the state, city and county are working together to open up hotels for individuals needing to self-isolate, and additional hotels for vulnerable homeless individuals that will also serve to reduce shelter populations that are time bombs for clients and staff.”

However, some respondents said they felt Mayor Schaaf has not been visible enough during the crisis.

Cheryl Smith, the CEO of Family Support Services, a nonprofit that offers programs and services for vulnerable children and their families, lauded Newsom but said she hasn’t heard a lot from Schaaf. “I could’ve missed it,” she said.

Indeed, Newsom’s presence has certainly elevated his national profile, although perhaps not to the extent that New York Gov. Andrew Cuomo’s presence has vaulted.

The Oakland Power Poll numbers reflected that trend, with Newsom posting an astounding 100 percent of those surveyed saying he’s doing a favorable job combatting the pandemic.

The Democrat was criticized for his rapid response, including shelter in place orders, but is now largely viewed as taking the right steps – at the right time.

Despite a staggering number of new unemployment claims and roller-coaster financial markets, residents were equally divided on how COVID-19 is hitting their own bottom line.

Some 43 percent are highly concerned about the personal economic impact, with 13 percent expecting a severe blow and 30 percent forecast a serious hit. However, there is a glimmer of hope with 40 percent anticipating little or no financial loss.

Larry Ginsburg, president of Ginsburg Financial Advisors in Oakland, said those living paycheck to paycheck will be hit the hardest. “Those who can afford to be financially healthy and not leave their homes are certainly fortunate.”

Oaklanders expressed fears about what will happen to their neighbors.

“I am retired with a pension, quite severely disabled and receiving Medicare benefits,” said Marilyn Chilcote of the Beacon Presbyterian Fellowship. “We will lose a good bit on our investments. But we will be fine. I have enormous concerns for my neighbors who are not in that situation.”

The survey offered no clear consensus on how residents plan to spend their $1,200 federal bailout checks, with 30 percent saying they will use the money to pay bills. Other responses were:

Ginsburg stressed the importance of building up a three-month emergency fund. “It’s the first thing people should do,” he said.

The dedication toward giving comes as no surprise, given the Bay Area’s reputation as one of the nation’s top philanthropic areas.

“It’s marvelous that 20 percent said they’d donate,” said Ginsburg, who served nine years on the board of the Alameda County Food Bank.

Methodology: The survey reached 301 community leaders from April 6-9, with a response rate of 10 percent. To view the list of Oakland Power Poll members, click here.