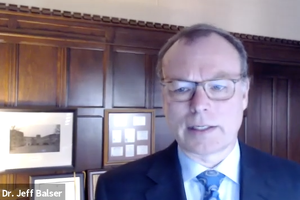 Many are on the front lines of the pandemic. And chief among them are the nurses, doctors, clerical workers, janitors, food preparers, building maintenace staff, and all others at Vanderbilt University Medical Center (VUMC). Dr. Jeff Balser, President and CEO of VUMC and Dean of the Vanderbilt Medical School, joined Nashville Power Poll members for a Zoom chat to describe his institution’s response to the crisis and where he seees the crisis going. Balser is a nationally recognized leader in the healthcare field. He is a 1990 graduate of the Vanderbilt M.D./Ph.D. program in pharmacology and completed residency training in anesthesiology and fellowship training in critical care medicine at Johns Hopkins. He returned to VUMC in 1998, was appointed dean of the Vanderbilt University Medical School in 2008 and, the following year, was appointed the vice chancellor for health affairs. He became president and CEO of VUMC in 2016.