Should there be a running of the Kentucky Derby, and would you attend?

What you think about the first Saturday in ... September 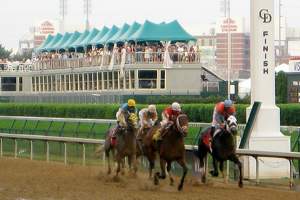 UPDATE, 8-21: Churchill Downs has announced today that no fans will attend the 146th Kentucky Derby, reversing an earlier decision to hold the race with fewer fans and safety measures such as face masks and temperature checks. The company said "the health and safety of our team, fans and participants is our highest concern" in the ongoing Covid-19 pandemic. The company statement quotes Gov. Andy Beshear, who had supported the decision to run the race, as supporting today's change as "the right and responsible decision" to take fans out of the equation.

Here's the poll story posted first thing this morning, and the results of the survey taken earlier in the week, in which 56 percent of you said "they couldn't pay me to go" to the Derby this year, if you had the opportunity.

The first Saturday in May came and went, with no running of the 146th Kentucky Derby, another victim of the Covid-19 pandemic that has claimed more than 170,000 American lives, cratered the economy, upended livelihoods, shuttered schools, and polarized citizens about the wearing of face masks.

But as the commonwealth and the nation went through phased “reopenings,” to varying degrees of safety and success, one of the big questions in Kentucky was: Would there be a Derby? If there were, would revelers be allowed at the Twin Spires track? The Indy 500, also delayed, would be held ... but without spectators.

Earlier this month, Churchill Downs announced the race would happen on Sept. 5, with fewer spectators but with masks — as well as health checks and measures for those who attend. In a 62-page operations plan issued on Aug. 12, the company said fewer than 23,000 people would be allowed to attend — making it more like the first Derby in 1875, when 10,000 attended, than 2019‘s when upwards of 150,000 jammed the track. Also, they will close the infield this year and walk-around and standing-room-only tickets will not exist in this running.

Further, Churchill wrote, “Temperature checks, medical questionnaires, physical distancing and mandatory face coverings will be required upon entrance and movement within the 190-acre Churchill Downs. An inherent risk of exposure to COVID-19 exists in any public place where people are present. Each guest will receive a courtesy “Healthy at the Track” bag, which will include a disposable mask, a pocket-sized hand sanitizer and a personal stylus for  non-contact self-service wagering.”

Kentucky Gov. Andy Beshear, who has gotten high marks statewide, nationally and among Power Pollers for his proactive prudence in dealing with Covid-19, took some flak for backing the race. Especially, as The Courier Journal reported, as the announcement and his support came as Covid cases in Kentucky spiked to their highest numbers, and the governor also urged a delay in the resumption of in-person school.

Though he called Covid “hot as a firecracker,” Beshear said Churchill Downs had worked with the state to run the race safely, and said masks would be critical to that effort.

So, of course, we wanted to know what Power Pollers think about a Run for the Roses  as Covid-19 continues to impact our lives, so we asked five questions about this decision, and 61 percent of those surveyed responded. Here are your answers.

— Do you agree with the decision to allow the race to be run on Sept. 5, with fewer fans in attendance?

40 percent said due diligence had been done, and that human safety had been considered; 10 percent said “another reason”; and 48 percent said not applicable, indicating a no answer in the previous question. One respondent answered, “The community needs the money.”

— If you had an opportunity, would you attend this year’s Derby?

— Has your opinion about Churchill Downs changed given their decision to run the race?

— Has your opinion about Gov. Andy Beshear’s handling of the pandemic changed because of the decision to run the Derby?

Beyond your answers to the poll questions, a good number of you shared more of your opinions about mixed messages, double standards, education, criticism of Poll questions and what we’re learning about ourselves in this pandemic.

Lesa Seibert: “I think they should absolutely run the race but only with owner, trainers, and families in attendance. The rest should be accessible online and on TV.”

Alexandra Thurstone: “I think they should run the races and televise them, but there should be no fans except for owners there. It's ridiculous to require schools to close, and then hold a big event like this, along with allowing bars to open and restaurants to increase capacity. This is sending a mixed message to the community.”

Angela Leet: “If folks can go to LouCity soccer games at (4,850 attendance) and limited attendance at the Kentucky Derby, JCPS schools should develop plans to allow adjusted/alternating attendance similar to that adopted by archdiocese schools. We are hurting children by not maximizing the limited time for education.”

Linda Duncan: “Am I sick of protesting so our downtown is a place to avoid? Definitely. Am I sad to see downtown boarded up? You bet. Did I miss the poll getting to weigh in on protesters blocking streets?”

Nat Irvin: “It’s a tough call but it’s the right call given the precautionary measures they’ve taken AND that the leadership team is monitoring the day-to-day numbers of Covid-19 cases. If we can hold these numbers down, we may find information that we can apply to other similar, large, people events that include schools, games, churches. We’ve got to see if we’ve learned anything yet. If we can’t ... we will know something very important: shut everything down.”

Kevin Bratcher: “I don’t mind if the Kentucky Derby is run this year or canceled. Either way it is their decision — no one else’s. Not the governor’s nor the government’s decision.”

As always, thanks for participating. Take care. Be well. We’ll see you next month.