How did Mitch McConnell do with the impeachment trial? 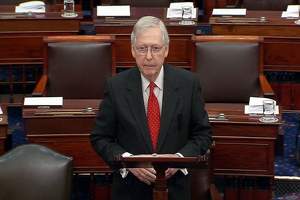 Earlier this month, the third impeachment trial of a U.S. president concluded in the same way as did those of Andrew Johnson, over several months in 1868, and Bill Clinton, in 1999 after several months of proceedings:

Donald Trump, the 45th president of the United States, was impeached by the Democratic-led U.S. House of Representatives on abuse of power and obstruction of Congress charges. Next, the Republican-led U.S. Senate conducted the trial to determine whether he was guilty of those charges.

Democrats had asked that additional documents and witnesses be added to the trial, but a majority of Republican senators voted against that; only two Republicans — Susan Collins of Maine and Mitt Romney of Utah — joined all the Democrats in that request. After the House managers made their case for impeachment, and the president’s legal team mounted his defense, only one Republican senator — Romney — joined the Democrats in a guilty vote on one of the charges, with both charges falling short of the needed two-thirds majority for a guilty finding.

With the acquittal in place, Trump made further history, becoming the first impeached president to run for re-election. This is new territory, and no one knows what impact the impeachment will have on his November prospects.

The same might be said for another power player in the impeachment drama who also is running for re-election, but we wanted to try to gauge some of what the hometown feeling was about him.

So here we are.

Kentuckians may have had a keener interest in the impeachment drama in Washington, D.C., because their senior U.S. senator is also Senate Majority Leader. Louisville residents may have paid even closer attention because Majority Leader Mitch McConnell lives here.

Though John Roberts, chief justice of the U.S. Supreme Court, presided over the Senate trial, it was McConnell who ran the Republican Senate strategy, and maintained control of his caucus, throughout the trial portion of the process.

Like other GOP leaders, McConnell spoke bluntly before the trial. In interviews, he said that he would not be an impartial juror in what he described as a political process, and that he was coordinating aspects of the proceedings with the president’s lawyers — all of which prompted not expected cries of protest from Democrats.

But would it prompt the same from Kentucky voters or potential voters as McConnell runs for re-election?

We wanted to know, so February’s Power Poll asked several questions about McConnell and his role in the trial of people who share a home city with him, and what that might mean to his re-election outlook.

We included a separate question about Kentucky’s junior senator, Republican Rand Paul, and his efforts during the trial to identity the alleged whistleblower whose report to a government inspector general kicked off the investigations which led to the impeachment charges.

Forty-five Power Poll voters of a 260-member field returned their own verdicts with these questions:

— Did you approve of McConnell’s handling of the impeachment trial?

— At this point, do you plan to vote for McConnell, whose Senate career began in 1985, in his fall re-election bid?

— Did the way he conducted the trial influence the way you plan to vote?

— If it did influence you, how?

— What did you think of Rand Paul revealing the name of the alleged whistleblower, after Chief Justice John Roberts would not read Paul’s question?

Thanks to those who participated. Here’s hoping for a better voter turnout in the next Power Poll ... and in November!