What do you think of GOP immigration, voter ID bills? 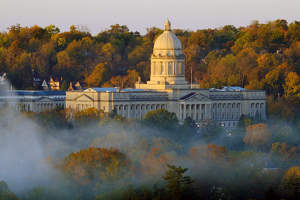 The Kentucky Senate began the 2020 General Assembly session by announcing its top two priorities would be cracking down on illegal immigrants and requiring voters to show photo IDs at the polls. But neither issue is a priority for most Lexington Power Poll members, according to the January survey.

The survey this week found that 88 percent of poll respondents (89 people) didn’t think undocumented immigrants were a major problem in Kentucky, compared to 12 percent (12 people) who did. A total of 101 of 256 Power Poll members responded, or 39.45 percent.

“If there is criminal activity then certainly they should assist federal agencies,” said Fran Taylor, a Power Poll member who owns Lexington Silver LLC and West High Publishing. “But if it’s just determining whether someone is here legally, then no.”

Republican senators aren’t the only ones interested in a voter ID bill. Michael Adams, a Republican who was elected Secretary of State in November, also has made it his top priority. But a majority of Power Poll members disagreed — 55 percent said voters should not have to show a photo ID, while 45 percent thought they should.

By a margin of 69 percent to 31 percent, Power Poll members thought the voter ID bill is more about giving Republicans an election advantage than preventing vote fraud.

“It is absurd that the Kentucky Legislature has made GOP talking points their top priorities in the 2020 session instead of focusing on Kentucky's real problems such as tax reform, the opioid epidemic, the cost of health care and education funding,” said Power Poll member Richard Polk, a principal at EOP Architects.

Evidence of vote fraud that could have been prevented by a photo ID is extremely rare in Kentucky and elsewhere. Critics of such bills say their main effect is to limit voting by poor people and minorities who may not have photo IDs.

“Our election laws must secure the vote, must encourage turnout and an informed citizenry and must make certain that voting is easy and convenient,” said Power Poll member David Adkins, CEO of the Council of State Governments and a former Republican state senator in Kansas. “Those who seek to unreasonably restrict ballot access are as antiquated in their thinking as those who thought women could not be trusted with a vote a century ago. What are they afraid of?”

I polled on these two issues because they were Republicans’ top priorities — and neither was among the choices I offered Power Poll members last month for ranking their top priorities for the General Assembly and Gov. Andy Beshear, a Democrat who unseated Republican Matt Bevin in the November election.

The final poll question this month asked who, so far, was doing a better job of trying to solve Kentucky’s biggest problems, Beshear or the General Assembly. Beshear won that vote, 80 percent to 20 percent.

But several Power Poll members criticized the question for a couple of reasons: I neglected to offer other options for answers, such as “neither” or “about the same”; and that it was too soon to be asking the question. I think those are valid criticisms. I apologize for not offering more answer options, and perhaps we’ll return to this question at the end of the General Assembly’s session.

Thanks for taking time to respond this month, and especially for offering helpful suggestions for improving the Power Poll and making it more interesting and useful to this group of Lexington’s most influential people. If you have other ideas, or suggestions for topics or questions for future polls, please comment below or send me an email.

See you next month.