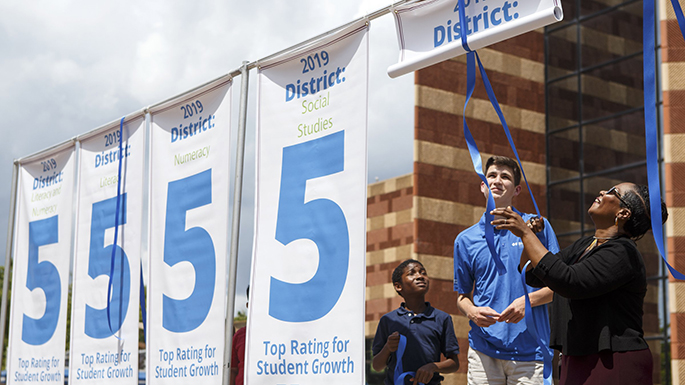 Less than a week after Hamilton County Schools officials announced that the district had received the top designation for student growth in the state — a Level 5 TVAAS score — local leaders responding to a new Chattanooga Power Poll said they think public schools here are improving.

Out of the 82 business, civic and government leaders who responded, 78% said schools are getting better, and 82% said the Tennessee Value-Added Assessment Scores (TVAAS) indicate schools are making improvements.

Since Superintendent Bryan Johnson took the helm of the district in July 2017, he has said he wants Hamilton County “to be the fastest-improving district in the state of Tennessee.” Last week, Johnson and his team announced what some called “historic” and “unprecedented” student academic growth and achievement.

Based on this year’s TNReady results and TVAAS scores, 32 schools in Hamilton County were named reward schools, which are among the top 20% in the state. The district received the highest level of academic growth across all measurement areas: literacy, numeracy, literacy and numeracy, social studies and overall — and 21 schools also individually earned Level 5 scores across the board.

Just over half — or 57% — of poll respondents rated the overall quality of public schools as fair, though, with only 31% rating school overall quality as good or excellent and 11% rating them as poor.

Hamilton County residents have long lamented the quality of local public schools, with almost one-third of families sending their children to private schools.

“You’re talking about schools that have been around for more than a century and have educated a great number of people in Chattanooga. And they, in turn, have had their sons and daughters educated at these schools,” he said. “There’s been a great deal of support for them. …. We’re blessed to have some really remarkable schools.”

But Hamilton County Board of Education member Jenny Hill, of District 6, said there isn’t a true apples-to-apples comparison of the local public school system and private schools.

“It’s difficult for families to make an apples-to-apples comparison of the quality of a public education to a private education because public schools are charged with meeting rigorous academic standards and publish those unvarnished to the community, as they should, whereas private schools set their own standards and can choose to publish certain data sets that speak best for their mission and vision,” Hill said.

Wilson and Hill agreed on the theory that “the rising tide lifts all boats,” as Wilson put it.

They are among many local leaders who were in support of the proposed 34-cent tax increase to benefit public schools that was shot down by the Hamilton County Commission at the end of this year’s budget cycle.

A May Power Poll found that 73% of some of the same local leaders were in favor of a tax increase, and in recent months dozens of local leaders and business have spoken out in support of public schools.

“I am glad that people recognize that our schools are improving, and it encourages me that they know that because it’s real,” she said. “Because we are going to need the ongoing support and encouragement of our community to continue to improve, because it is in the best interest of Hamilton County’s long-term future for our public schools to improve.”

The Power Poll is not a scientific survey. It includes responses from business, government and nonprofit leaders who influence and help shape the local community.