Four out of five people who have considered leaving the Bay Area say those are the issues prodding them to move elsewhere. 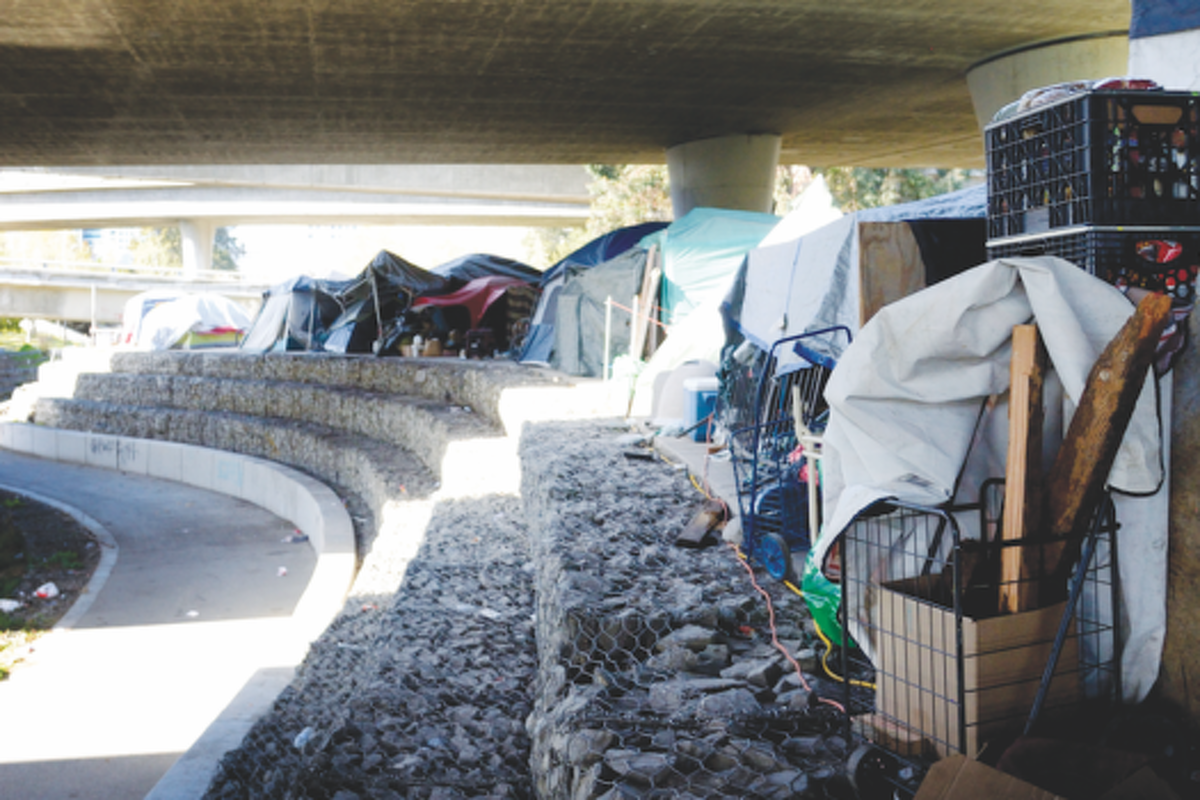 Homelessness, housing and blight once again dominated the San Jose Inside Power Poll, as 80 percent of those people who have considered leaving the Bay Area said it will take improvement on those issues to make them content to stay here.

Slender majorities also oppose clearing Guadalupe River Park of the homeless to comply with a mandate from the Federal Aviation Administration, and favor conversion of the Pacific Motor Lodge into housing for the unhoused even if it jeopardizes construction of an adjacent 520-unit residential high-rise.

Finally, 60 percent of people who ventured an opinion said the San Jose city council did the wrong thing by weakening its employee vaccine mandate in response to pressure from the police union.

Due to an editing error, our question regarding the 2022 mayor’s race inadvertently left out City Councilmember Raul Peralez, the first candidate to formally enter the field. Apologies to the candidate. We are discarding those results and will revisit that question in our November poll.

A recent Joint Venture Silicon Valley poll indicated that 56 percent of Bay Area residents expect to leave the Bay Area in the next few years. If you have considered leaving the Bay Area, what changes would make you content to stay?

The Federal Aviation Administration recently warned San Jose International Airport to clear the large Guadalupe River Park homeless encampment near the airport or risk jeopardizing millions of dollars in federal funding. Should the city council vote to fence off the park?

Should the 72-room Pacific Motor Lodge in the SoFA District be converted into a single-room occupancy homeless housing facility even if it jeopardizes 520 units of highrise housing at the adjacent BoTown site?

Did the city council do the right thing by weakening its employee vaccine mandate and allowing unvaccinated police officers to remain as employees if they’re tested for Covid twice a week?

Never before in the history of Bay Area Power Polls — now going on their 20th month — has any question yielded more comments than our open-ended question about leaving the Bay Area. Following on the heels of a recent poll from Joint Venture Silicon Valley and the Bay Area News Group, we asked those panelists who “have considered leaving the Bay Area” to explain their thinking.

And did they ever.

No topic came remotely close to equaling the combined outpouring of responses for some combination of sentiments that can be summarized as “build more housing;” “clean up our city;” and “reduce homelessness through more services, less tolerance or both.”

“We live in the richest area in the world, yet it is managed as poorly as a third-world country. Garbage on every street and highway. Homelessness, and law breaking is rampant. … Affordability. I can sell my home at a significant profit and live comfortably elsewhere. I am among the lucky ones. Many cannot even afford a home. … Stronger anti-vagrancy enforcement by police and city agencies. … Build MIDDLE-income housing (so much needed focus on homeless, low and super high market housing; but what about the young people making 50-to 100k?). … Deal wisely with the people living in tents etc. and all their accumulated trash. … Get control of the mentally ill and chronic-substance-abuse street population by providing inpatient services and structured housing. Clean up the garbage littering and polluting our city sidewalks, freeways, parks, etc. … I love living in this area, but housing costs make it difficult to save for retirement. … Rodent control, it's an epidemic right now, health issues will follow. … Solve the homeless problem by developing mental health facilities instead of spending billions on housing.”

Desire for a solution to homelessness was more popular among panelists than support for new housing — but just barely. Frustration with blight and vagrancy was close behind. Not surprisingly, voters displayed a stark difference of opinion on both of our other questions related to homelessness, with slight majorities favoring tolerance for the homeless encampment at Guadalupe River Park and support for more homeless housing even if it ends up scuttling a nearby 29-story luxury housing development from the Canadian developer Westbank.

Such are the stark divisions in San Jose regarding housing and homelessness. No surprise this has already emerged as a major issue in the 2022 mayor’s race.

Regarding the other improvements desired by people who have considered leaving the region, there were few surprises. Frustration with traffic, taxes, and infrastructure all tolled a few votes, along with — naturally — rent and cost-of-living (see housing). Resentment with government was the other major vote-getter, whether it took the form of hostility to Covid-related restrictions, weariness with California’s war on the gig economy, or irritation with the prominence of racial politics in San Jose classrooms.

Perhaps most notably, our question suggested a profound unease among the members of our panel. Politicians who focus on housing and homelessness should expect great interest in their policies.

As with our past questions regarding Covid-19 rules, a clear majority of respondents favored the more-restrictive position, with three out of five voters who had an opinion disapproving of the council’s weakening of city-employee vaccine protocols. That support for an employee vaccine mandate was lower than panelists’ prior support for a classroom or restaurant vaccine mandates most likely stems from panelists’ awareness that the city has struggled to hire new officers in recent years.