Get the A's Deal Done — But Make It Good

Plus, criticism of Schaaf's approach, support for Biden, and the case of the missing stimulus checks 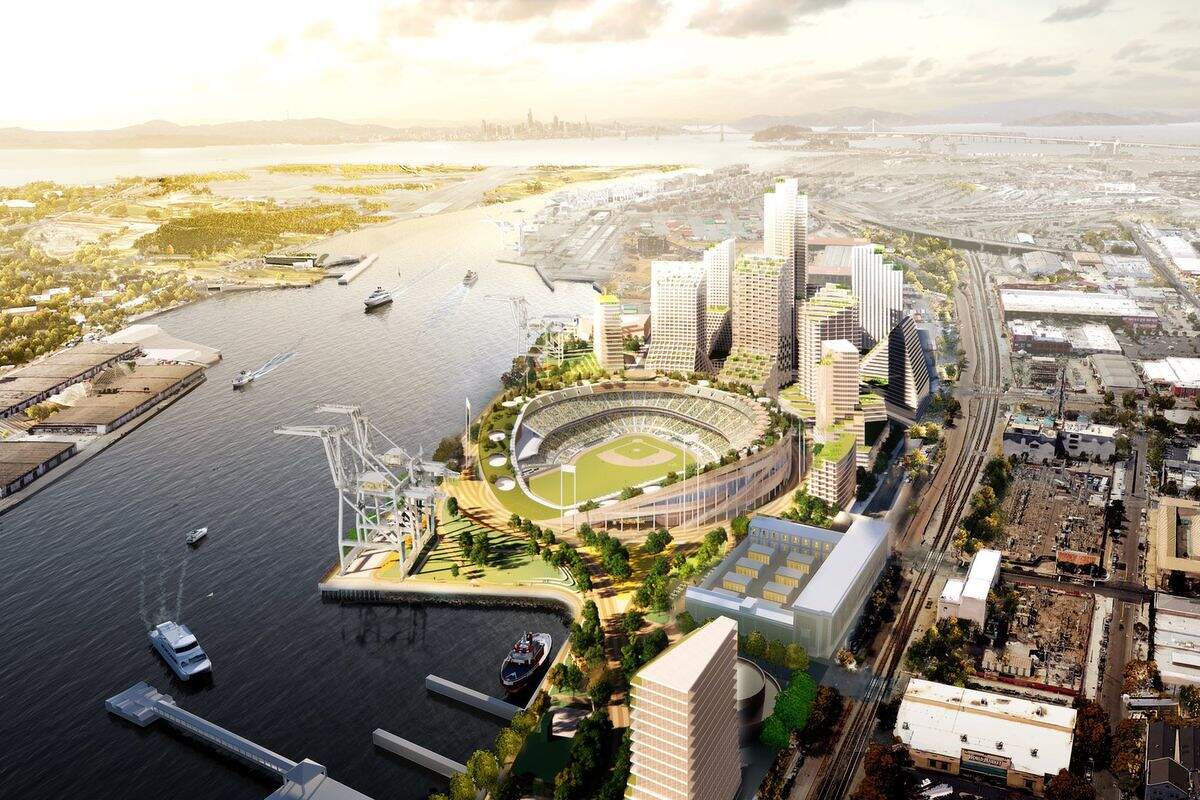 A high percentage of Power Poll members are eager to see Oakland A’s baseball games played at the proposed Howard Terminal stadium site. Some 85 percent of participants in our latest poll appear to support at least a stadium on the largely barren stretch of waterfront property just west of Jack London Square. And yet, two thirds of you also want the Oakland City Council to negotiate a better deal than the one the team recently unveiled.

Meanwhile, 81 percent of participants were critical of Mayor Schaaf’s initial plan to restrict her basic income pilot program exclusively to non-white families. Almost 48 percent said the criteria for such a program should be income, 10 percent more said they oppose discriminating to end discrimination, 5 percent believe such payments to be a poor idea and almost a fifth — 19 percent — wondered what has happened to their mayor. The administration subsequently indicated that low-income whites will not be barred from the program. On the other hand, more than 14 percent supported the program as a form of reparations in redress of historic discrimination.

Turning our gaze toward the nation’s capitol, 81 percent of respondents expressed general support for President Biden. Only 19 percent were at least somewhat critical, with almost 10 percent wishing the president were moving more swiftly on progressive issues, and an equal share criticizing his approach to infrastructure and/or immigration. However, and not surprisingly in progressive Oakland, 52 percent are happier than they thought they would be, given the boldness that Biden has shown on several issues.

Finally, in our poll’s most shocking results, just 19 percent of respondents said they have received all three federal stimulus checks related to the Covid-19 pandemic, with another 5 percent not sure. That means that at least 76 percent of you received just one or no payments. On the plus side, maybe by the time you do get your money, there will be more places at which to spend it.

Here are the specific questions and responses to our latest Power Poll:

The A’s revealed the details of its proposal to build a ballpark at Howard Terminal. It also includes 3,000 residential units, about 1.5 million square feet of commercial and 250,000 of retail space, a performance venue, 400 hotel rooms, and up to 18 acres of open space. It would redirect property taxes for decades to pay $855 million for onsite and offsite infrastructure, $450 million for "community benefits," and $955 million to the city. A vote could come by July. What are your thoughts? Please select up to five positions you agree with, in order of preference.

The A’s seem to be negotiating in good faith. Let’s hope the council does, too. — 1st Place, 61.9% overall support

Those numbers are probably inflated. Approve it, but get a better deal. — 2nd Place, 52.38% overall support

The council should do whatever it takes to get the team to “StAy.” — 3rd Place, 47.62% overall support

A stadium works, but that other stuff makes no sense near the port — 5th Place, 23.81% overall support

I support the stadium, but Schnitzer Steel needs to be protected — 6th Place, 19.05% overall support

Politicians who vote against this will never again get my vote — Last Place, 19.05% overall support

At the outset of what could be the home stretch of the team’s decades-long quest to secure a location for a new stadium, fully 85 percent of participants appear to support at least a stadium near Jack London Square. And notably, our single-most-popular response calls on the city council to display the same good faith that 62 percent of you believe the team is displaying.

And yet, very few of you desire the council to just roll over and approve the deal. Our two first-place choices, and two thirds of all votes, explicitly call on the council to “negotiate,” “get a better deal,” or convince the team to remove some of the non-stadium bells and whistles from its proposal. But only 24 percent explicitly ask the council to streamline the team’s development — exactly the same percentage who said the A’s should rebuild at the Coliseum or follow a certain football team to Vegas.

Finally, some 19 percent of you pledged to never again vote for council members who don’t ultimately back a stadium. Thus, council members will have to think long and hard before running the risk of alienating a fifth of their most influential constituents.

Several participants weighed in anonymously on the stadium proposal. The following comment perhaps best captured the overall mood of respondents. “There is great value in having the A's stay in Oakland, and there's great upside to siting the stadium at Howard Terminal,” the panelist said. “At the same time, there must be great care taken to ensure the current residents are not displaced. I remember San Francisco before the Giants built their waterfront stadium. That area was desolate, industrial territory, similar to Howard Terminal. It's become an economic engine for San Francisco. We deserve that in Oakland, too, with appropriate safeguards.”

Others made points that our question did not address. “I care about what happens with the existing Coliseum site more than I care about where the A's play,” said one. “That has to be part of the conversation. How will they prevent the site from being blighted, and ensure it is improved SIMULTANEOUSLY or even before the new A's stadium? What we don't need is more dumping sites in East Oakland. We need that space to be of benefit to the community.”

An opponent of the Howard Terminal site asked “Where are more questions or choices reflecting the reasons not to build at the port? Building a stadium near one of the most successful ports in California makes absolutely no sense. It will be hard to get there, retail and commercial will compete with port business and for what benefit to our city and economy? I see this as a boondoggle. Rebuild at the Coliseum.”

“Redirecting our property taxes for a mostly entertainment project is a NO for me. We need those tax dollars to maintain public safety, Recreation & Parks, public health issues, crime prevention, education and a host of other municipal responsibilities. In addition to absorbing a massive amount of our property taxes, the project lacks access via Bart and has only 3500 parking spaces for a 35,000 seat stadium. … I would love a new stadium but not at the cost of maintaining our City.”

Several voters counseled patience. “The A’s are demanding a vote by July but there’s no other reason a vote should come by then,” said one. “Pushing their deal through ignores the years-long efforts to win real commitments to hire from the community, provide affordable housing and enviro protections. Also ignores EIR timeline which won’t be done by then. The city shouldn’t approve anything until those pieces are done.” Added another, “It is clear that the A’s are not negotiating in Good Faith; they have repeatedly made claims that are not easily refuted (e.g, they will not need public subsidy). And the County’s deal at the coliseum is a travesty for taxpayers. The public should know the real cost (and loss) to the public agency based on a deal that does not have the A’s paying anything until years from now.”

With regard to the issue of timing, given that a strong majority of voters want to see the deal done but also improved, team President Dave Kaval’s hopes that this can head to a vote within the next month or so may be optimistic. Working out the myriad issues that need to be resolved to transform that largely barren stretch of coastline into a stadium with enough other amenities to make the deal pencil out, won’t be done quickly.

So, don’t buy those new season tickets quite yet — unless you’re buying them at the Coliseum.

One final note on this question. One of you wisely noted that the poll should have made it clearer how to answer our ranked-choice-style question. That was good feedback, which I will heed going forward. Based on how you voted this time, our results could not have been affected much by any confusion.

Mayor Schaaf recently proposed giving $500 a month in “universal basic income” to 600 recipients. The funds were to be earmarked for low-income families with at least one minor child — but only for people of color. After receiving criticism for excluding low-income whites, the administration said no one will be barred, though non-whites will be prioritized.

The criteria should be income, which will favor minorities anyway — 47.6%

What ever happened to Libby Schaaf? — 19%

Affirmative action is fine, but giving people money is a stupid idea — 4.8%

The two participants who provided comments both sprung to the defense of the mayor’s proposal. “The Universal Basic Income proposal is actually not a true UBI proposal,” one wrote. “Nevertheless, the privately funded pilot for reducing poverty is about redressing inequity and demonstrating the need for additional aid for families that are barred from access to support. Numerous reports reveal that poor whites in Alameda County have decisively better health and income outcomes for their families compared to people of color.”

Another voter quarreled with our questions’ wording. “Schaaf’s proposal did not encounter “criticism”; she was attacked by Regressionists on conservative talk networks,” the panelist wrote. “The poll should clearly state that these funds were prioritized to support families with youth at greatest risk for death and displacement, not as stated here.”

After the first 100 days, the character and nature of the Biden administration is becoming apparent. What are your thoughts about the president?

I support his priorities, and am happier than I hoped to be — 42.9%

I like his instincts, but doubt Congress will play ball — 9.5%

He’s better than I expected, but moving too slow on progressive issues — 9.5%

I’d support real infrastructure or immigration reform, but that ain’t it — 9.5%

When you last checked, had you and your family received all three Covid stimulus checks?

Finally, a few of you took offense to the way I worded some questions, chiefly those related to Biden’s performance. As I hope this story makes clear, I am devoted to accurately reflecting your opinions. But I’m also dedicated to making sure that the broadest range of viewpoints are represented. So while none of you selected the following answer — “Are you kidding me? Trump won” — I believe it was important to reflect that viewpoint, since many Americans do hold such views.

As you know, Power Poll is not a scientific poll. Rather, we gather together influential people in our community ask them questions. The answers to the survey and the subsequent dialogue are meant to be instructive and helpful to those who seek to advance the city forward. Power Poll is non-partisan.